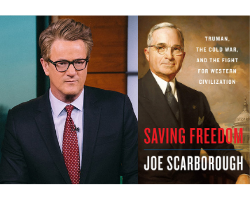 In Saving Freedom, Scarborough recounts the historic forces that moved Harry Truman toward his country’s long twilight struggle against Soviet communism and how this untested president acted decisively to build a lasting coalition that would influence America’s foreign policy for generations to come. President Truman’s policy was a radical shift from 150 years of isolationism, but it would prove to be the pivotal moment that guaranteed Western Europe’s freedom, the American Century’s rise, and the eventual collapse of the Soviet Union. Truman’s triumph over the personal and political struggles that confronted him following his ascension to the presidency is an inspiring tale of American leadership, fierce determination, bipartisan unity, and courage in the face of the rising Soviet threat.

Scarborough is co-host, along with Mika Brzezinski, of MSNBC’s “Morning Joe.” He was named to the prestigious “Time 100” list of the world’s most influential people and Vanity Fair named him to their 2012 list of Top Media Power Players. In 2016, he was inducted into the Cable Hall of Fame. Scarborough is a Washington Post contributor, as well as a New York Times best-selling author. His works include Rome Wasn’t Burnt in a Day, The Last Best Hope: Restoring Conservatism and America's Promise and The Right Path: From Ike to Reagan, How Republicans Once Mastered Politics—and Can Again.

Copies of Saving Freedom will be available for purchase courtesy of the Learned Owl Book Shop. Registration for this program is required and a valid email address is required at time of registration. Participants will receive an email invitation to attend the program, hosted on Zoom, a day before the program begins.