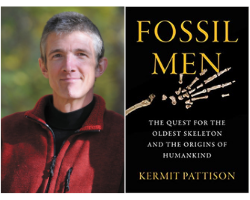 In 1994, a team led by fossil-hunting legend Tim White uncovered a set of ancient bones in Ethiopia. Radiometric dating of nearby rocks indicated the resulting skeleton, nicknamed Ardi, was an astounding 4.4 million years old. The team spent the next 15 years studying the bones in strict secrecy, all while continuing to rack up landmark fossil discoveries in the field and becoming increasingly ensnared in bitter disputes with scientific peers and Ethiopian bureaucrats over scientific convention and human evolution.

Pattison is a journalist whose work has appeared in the New York Times, GQ, Fast Company, and Inc., among many other publications. He spent more a decade doing research for Fossil Men, a large portion of which was spent in the field in Ethiopia with the team that discovered Ardi.

Copies of Fossil Men will be available for purchase courtesy of the Learned Owl Book Shop. Registration for this program is required and a valid email address is required at time of registration. Participants will receive an email invitation to attend the program, hosted on Zoom, a day before the program begins.