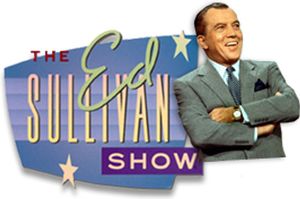 Backstage with Ed Sullivan - VIRTUAL PROGRAM
ZOOM
Monday, Apr. 19, 7:00p.m.
Ed Sullivan was the ultimate American television impresario whose television show became the most successful and longest-running variety show in U.S broadcast history.  We will journey with Ed from his early days as a sports and entertainment reporter and syndicated columnist, to his becoming the quintessential star maker of the 50’s and the 60’s.  The Ed Sullivan Show included every type of entertainer: classical musicians, opera singers, comedians, ballet dancers, popular recording artists, songwriters and dramatic actors.  Sunday nights were incomplete without watching The Ed Sullivan Show.  Television critic, David Hinckley, has been quoted as saying “The Ed Sullivan Show was by any means the last great TV show."

The presenter for this special program is Vinnie Bruno. Bruno is a Beatles Scholar and Sixties Rock Historian.  He recently retired as Director of First Year Programs at LaGuardia Community College (City University of New York). He holds an MPA from Baruch College and as an adjunct professor for 25 years he taught courses in numerous disciplines including Humanities, Business and Mathematics. As a 60’s Rock Historian he offers programs on the many extraordinary innovative artists who defined an era by creating musical landscapes that captivated a generation and whose influence in popular culture still endures five decades later.